One summer during my college years I worked as a dude wrangler (their first female wrangler) at a Colorado guest ranch in the Rocky Mountains. During a trail ride I wrangled on for a group that was there for a corporate retreat, a very gentle draft horse in the line trotted just two steps down a slight incline, and his passenger-- a spoiled, overweight wife of an executive, fell off. She sued the ranch, claiming that the horse had thrown her off 'in a fit of violent bucking' and claimed that it had permanently injured her.  I was bringing up the rear in the line of riders, so I had witnessed the incident and knew that she had actually just bounced-- and losing her balance, slid clumsily off the side while hanging onto the horse and saddle horn, and wasn't hurt at all.

The jury trial was months later, so after first deposing me in a phone call, the attorney for the ranch flew me back to CO to be his key witness in the trial. It was my first time testifying in court, but since I had seen the accident occur, I felt that I would have no problem describing what happened.  While I was being questioned on the witness stand, the attorney for the plaintiff did his best to make me nervous, hoping I would stumble and give a response that he could use to his advantage.  I'm not sure why, but although I was in an unfamiliar and high-pressure situation, he was unable to unnerve me.  I even was even able to make the judge and jury laugh a few times with some of my answers when he asked me dumb questions that showed that he knew very little about horses.  One example was this exchange:

Her attorney:  "How far behind the plaintiff were you when the event occurred?"
Me:  "I'm not very good with calculating distances, but there were six horses in line between us."
Her attorney: "Well, can you tell us an approximate distance?  Maybe calculate it in horse lengths?"
Me:  "OK.  It was six horse lengths."
Judge: "Move on, barrister."
I looked around the courtroom, and the judge and most of the jury members were either laughing or trying not to.

We won the case, the woman got nothing but a big legal bill, and I got a few days off from college classes and an all-expense paid 'VIP' trip to Denver with my best friend, who I'd required the ranch to also cover costs for, so I wouldn't have to make the trip alone.

Little did I know then that my brief experience in testifying in that case would give me the confidence I would need almost two decades later when called upon to testify-- sometimes for a full day at a time, in a very long and arduous legal process that my husband and I navigated in our determined effort to adopt our then-foster daughter.  We believed that we had to prevent the very bureaucratic child services system from returning her to abusive birth parents who'd both served jail time after being convicted of severe (almost deadly) child abuse.  We had come to know them over the course of our daughter's years with us, and felt strongly that if returned to them, it was likely that she would be subjected to more horrific abuse, and might not survive.

We won the case.  It took seven years and 16 hearings- one of them six days long, and a long, painful process through four levels of court, resulting in a final, nationally-precedent-setting victory in the state's Supreme Court. Since then, our case has been used thousands of times as precedent to help other families adopt abused, at-risk children when in conflict with the foster care plan for them.  (You can Google 'Nash-Putnam vs McCloud'  online, and see the thousands of cases in which it was listed as a precedent case to help another child.)  I should thank that lady for falling off her horse and suing the guest ranch.  In an odd way, her frivolous suit helped us save a life-- and has continued to help many others, since. 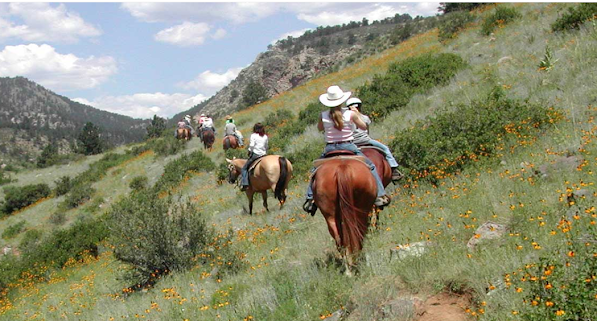 Photo: The infamous trail ride route, a few yards from 'the scene of the crime'.
Sylvan Dale Guest Ranch, Loveland, Colorado
Added note:
Have you ever heard the term 'at-risk horses'?  I'll tell you how that phrase came to be.
During the mission to adopt our daughter almost 30 years ago, I did a lot of research in the special kind of care that severely abused babies must have as a part of their recovery.  I read a book that used a new term, 'at-risk children'-- defined as children who've been so severely abused that they are at risk of never recovering, emotionally.  Many years later, I began another adventure- helping horses that were termed at that time as 'unwanted horses'.  It occurred to me that the term 'at-risk horses' was a better fit for their situation, so I coined the phrase and began using it in social media posts and articles.  'At-risk horses' has become the go-to term used throughout the equine rescue world to refer to 'a horse that is at risk of being neglected, abused, injured, or slaughtered'.  If you search for the very first public use of the phrase, 'at-risk horses', you'll find it in one of my early Facebook posts.  It occurs to me now that there was an unexpected full circle connection between a job as a wrangler that I chose at 19 because of my love for horses, a later effort to adopt and provide a life of love for an abused little girl, and much later-- Fleet of Angels, an endeavor that now has a positive impact on thousands of 'at-risk horses' nationwide.  Isn't life an interesting place to be!
To view more articles on this site, click here.
Posted by Elaine Nash