An Essay on Hunting 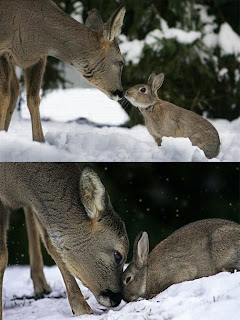 I have been opposed to hunting all my life. Although I grew up on a New Mexico farm and ranch where animals were killed regularly and for various reasons- ranging from their being a food source (beef, chickens, pigs, and even rabbits) to their being a danger (rattlesnakes), I have never gotten used to the idea of killing a living thing- especially for the fun of it.

It’s never been easy for me to see something die. When I was a kid, I witnessed a deer being accidentally shot through the spine, and then watched as that beautiful doe tried to flee down the mountain on her front legs, dragging her hind quarters, and screaming in absolute agony until a second bullet finally ended her misery. Over forty years later, I can still see that doe and hear her tormented screams. From that day forward, I was officially and emphatically against hunting- and even fishing, for that matter.


I’ve always looked at hunters simply as macho men whose egos are somehow boosted by tromping though the woods toting along all sorts of gear and weapons which make the hunt anything but a fair fight. I’ve always seen them as heartless people who like to hunt
just because they think that killing beautiful wild animals is fun.

“Why don’t they just shoot them with a camera instead of a gun?!” I would ask. I heard every standard “Hunting is alright because it’s for the food.” and “It’s important to thin out the herds.” explanation in the book, but I still flinched at the notion that anyone should enjoy killing anything, any time. After all, that’s what grocery stores are for. “If you want a steak, go buy it!” I’d say. “Hunters are predators. Humans should be more evolved than that!”

And then…. and then…. a few months ago, I had a revelation. It suddenly occurred to me that there is another category that must be included in the great hunt/don’t hunt debate. That category is: Scavenger. There’s prey (the animal), predator (the hunter), and scavenger (me!). It was a rude awakening to realize that I fall into the same category as a vulture! It’s true. I don’t kill my meat. I wait for someone else to kill it, and then I eat it. That makes me a scavenger. Not a very appealing label.

I am pretty skilled at scavenging. If I’m careful, I can make my purchase, get it home, open the package, and get the big hunk of animal muscle into the pot or onto the grill without ever having to actually touch it or even think about what it really is. I can buy, prepare, and even eat my delicious meat dish without having to consider that what I’m enjoying was once a living animal that lived its short life in close quarters in a human-controlled environment with thousands of others like it, and was alive just for the purpose of dying to become food. It’s killed in an inhumane and terrifying mechanized process, and then chopped up and shipped out in nice, pink chunks by someone else- just for me to eat.

Folks like me go out and order a nice big juicy steak- and then eat it with delight, while engaging in lively conversation about how awful it is that someone dared derive pleasure by shooting the deer or elk whose head is hanging above us in the steak house, and is glaring at us with big glass eyes.

So I’ve changed my mind about hunters. They do what I won’t do, and they’re honest about it. They come much closer to earning the right to eat an animal that they’ve stalked in the early morning cold, shot, quartered, and packed out of a deep canyon on their backs, than I do by driving in my temperature-controlled vehicle to the Musak-playing grocery store where I casually select a big package of meat- all nicely packaged in clear, clean plastic wrap.

I still can’t kill anything for fun. I suppose I’ll always be the type who carefully escorts spiders out of my house rather than stomping on them, and I will continue to use devices which produce ultra-shrill sounds that make mice hate my garage and move away on their own, rather than poisoning them. I have acquired a different way of thinking about those who hunt and kill edible game, though.  Yes, I’m a scavenger- but at least I’m honest about it now - and I’ve come to have a lot more respect for hunters- the “predators”- who forage in the woods for food.

To view more articles on this site, click here.
Posted by Elaine Nash

Elaine Nash
United States
For over 15 years, Elaine Nash’s Nashville Music Row-based company, Pro Media Nashville, provided management, public relations, and journalistic services for entertainers like Neil Young, Jerry Lee Lewis, Reba McEntire, George Strait, Loretta Lynn, and others. She interviewed legends like Robert Duvall, Jane Fonda, David Hasselhoff, George Burns, Dolly Parton, Tom T. Hall, Johnny Cash, Hank Williams Jr, Willie Nelson, and Bonnie Raitt. She worked on numerous TV specials, was business manager of Skip Stephenson, star of NBC’s #1 show, 'Real People', and worked with comedians like Gary Muledeer, Sinbad, and Jim Varney. Elaine was named Public Relations Person of the Year by the National Entertainment Journalists Association. She now resides in New York City and Colorado, where she provides social media marketing services through her company, Nash New Media. Nash is the Founder and Director of Fleet of Angels, a not for profit organization with thousands of members who provide transportation and emergency assistance for at-risk equines in the US and Canada. (www.FleetOfAngels.org) She has two kids- a CO cowgirl daughter, and an actor son in NYC.