The Story of Dom and Keebler 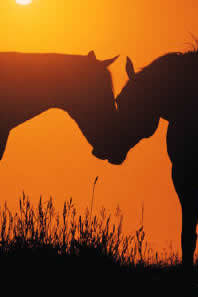 There are examples throughout nature of animals having deep, complex emotions and attachments that we seldom acknowledge.  We buy and sell animals, separating them  from their families, friends, and social groups without any thought of the feelings of loss they may be suffering. We seem to have convinced ourselves somehow that the bonds that we establish  can exist only between humans and isn't a part of the animal world.

My best lesson in understanding the emotional capacity of animals was when I saw two geldings, Dom and Keebler, being reunited after seven years apart.  They had been pasture mates for just one year in South Carolina, but had not seen each other for the following seven years after Dom had come to join my family and horses on our ranch in New Mexico.

Dom, my gorgeous gray national champion Andalusian gelding, had seemed to settle in to his new life as a member of our free-roaming herd after he'd arrived in New Mexico.  We had no idea that there was a big hole in his life where Keebler, a big beautiful spotted Appaloosa gelding, used to be.  When we were given the opportunity to also own Keebler, we were thrilled and plans were made for him to be shipped from South Carolina to Santa Fe.

The day of his arrival finally came, and we eagerly awaited sight of the truck.  As the horse transport van bringing Keebler made its way up our long winding dirt road through the Pinon forested hills in the distance, Dom started running around the pen we'd put him in,  and was nickering in a shrill call that we'd never heard from him before.  We couldn't see or hear the truck yet, as it was still over a half mile away and was hidden by the hills and trees.  The closer the truck got, the more excited and loud Dom got. As the truck got closer to the barn, we could hear that the calls were being returned with screams that reflected the same excitement.  I let Don out of his pen and he raced to meet the truck, nickering, slinging his head, and kicking up his heels every few steps.

When the driver pulled to a stop at our barn, Dom raced in circles around the truck,  nickering loudly. The handler led Keebler off the truck and the big Appaloosa- always the gentleman before, rushed ahead down the ramp, pushing past the handler, and almost jerking the lead rope out of his hand.  Dom met Keebler at the bottom of the ramp as we unsnapped Keebler's lead rope and let him go.

With joy that would be obvious to even the most callous skeptic, they pranced and sniffed and whiffled and reared and raced around the barnyard side by side, bucking and kicking the air.  Then, suddenly each stopped in their tracks and just nuzzled each other for a very long time.  Those two horses came as close to embracing each other as horses are physical capable of.  From that day forward, neither ever left the other's side for longer than our occasional rides. If we rode one and not the other, the one left behind waited patiently by the gate, seeming to know that they would be together again shortly. We were often struck with how they even seemed to graze in tandem with their steps and movements matching the other almost identically as they enjoyed their freedom on the spacious ranch.

Years later, after Keebler succumbed to colic during surgery and died, Dom simply lost his spirit.  He eventually rejoined the rest of our horses in the pasture, but never was 'himself' again.  He died about a year later.

It was during those very enlightening minutes watching animal friends being reunited that I realized how bonded animals can become in a very deep and personal way.

Author's Note:
Every time an owner sells or otherwise permanently separates two horses who have bonded closely, they are doing the equivalent of breaking up a loving human friendship or couple forever.  Imagine suddenly never being able to see or hear from your best friend or partner again, and you don't know why.  One day you're together and secure, and the next day your partner simply disappears forever.  Sometimes we can't prevent that from happening with animals, but frankly most people don't even try to keep closely bonded horses together.

It would be a great step in the evolution of mankind if we became more aware of the needs of the creatures around us and focused a little less on the 'man' and a little more on the 'kind'.


To view more articles on this site, click here.
Posted by Elaine Nash