The Earliest Americans Were Horses 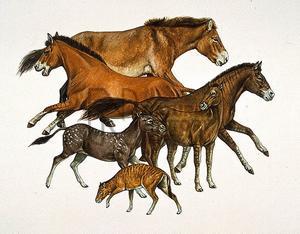 ﻿America's wild horses face a perception problem.  They are the victims of much misinformation, historical inaccuracy, and social amnesia regarding their true origin and evolution. Even some studied scholars have failed to absorb the data provided in the most current studies regarding  the wild horses' true origins, their impact on the land, and their value as a true and natural creature of the American wild lands.

Horses are indigenous to North America. That's a fact.  They were here long before  many other species that we hold in such high esteem as our 'native wild creatures'.  In the 1940’s and 50’s,  the attitude was popular- especially among ranchers, that horses were intruders- 'feral' animals borne of discarded livestock, that they are not indigenous to this continent, and that they should be hunted down and destroyed like vermin.  However-- DNA studies done by the University of KY and others in recent years have shown that some of America’s current wild horse bands may be direct ancestors of a branch of the horse ‘family tree’ that was thought to have been extinct here, but perhaps was not. In other words, a small number of wild horses may have evolved on this continent undiscovered, resulting in some of the unique DNA found in a few of the wild horses tested in these studies.

Additional myths are that horses destroy eco-balance in the same manner as cattle.  Not true.  Horses have a completely different impact on the land than cattle do. There are people who say "cattle-and-horses" in the same breath in their analogies of grazing habits, social behaviors, and reproduction habits as though they are the same.  That is far from accurate- and it is those inaccuracies that help feed the notion that wild horses are allowed to run free only as a 'favor' granted by us, and can be fairly shunned by our citizens at will, based on the social trend du jour.

Whatever philosophies toward status and protection applied to any other native creature must also be applied to wild horses.  Yes, they must be managed, as other wild creatures are- but they must also be protected. It is their right as a species indigenous of the Americas. 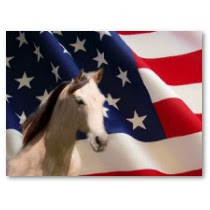 Ironically- this is the one national topic that seems free of political bias- as there are both supporters for and detractors of protecting wild horses on both sides of the barbed fence of politics.  If our wild horses do nothing else in this country but make it possible for us all to agree on just one thing- that brutality and abuse against these creatures is wrong- then they have accomplished something that almost no other living thing ever has.


To view more articles on this site, click here.
Posted by Elaine Nash